Case File: Gulf Breeze UFO
Location: Gulf Breeze, Florida
Date: November 11, 1987 to July 1988
Description: Gulf Breeze is a small city on Florida's northwest coast with a population of about 6,000 at the time of the 1987 UFO sightings. It is located near a military base. The strange glowing lights seem to surround mysterious structures resembling flying saucers.

History: Since November of 1987, the city of Gulf Breeze, Florida, has been inundated with dozens of UFO sightings. Over one-hundred people have witnessed more than eighty sightings of unidentified objects in the skies over Gulf Breeze. The sightings began on the night of November 11, when Gulf Breeze resident Ed Walters noticed a strange light in the sky outside of his home. When he went outside to get a better look, he noticed a large, glowing object hovering a few hundred feet away. The object made no sound. With his Polaroid camera, managed to take five photographs.

When the photographs became public, other residents began reporting seeing a similar object in the night sky. Five days after his sighting, Ed brought the photos to the attention of Duane Cook, editor for the Gulf Breeze Sentinel. Duane was uncertain about publishing the photos, as he felt that the story was not well-suited for the newspaper. However, when his parents came to visit, he showed them the photos. They were shocked, as they had seen the same object a few days earlier.
After the photos were published on November 19, reports of UFOs increased throughout the town. During a six-month period, 135 people reported 80 different sightings:

From November to May, Ed took thirty-seven clear, high-quality photographs of the UFOs. Due to the quality, many people became skeptical. However, Ed claimed that the photographs and his sightings were genuine, along with the other witnesses.
On December 3, the Sentinel received two anonymous photographs of the object. On December 23, the paper received more photographs. This time, the photos showed more than one object. The day after those photographs were allegedly taken, Ed also took photographs of multiple objects. On December 28, he captured the objects on videotape. In another photograph, taken on December 2, he captured an object with a beam of light coming from it and hitting the ground. The light was also observed by five other witnesses.
Ed's closest encounter occurred on January 12, 1988. He was driving along a deserted road about five miles from home when he encountered a bright light. The light was so bright that he drove off the road to avoid it. He took another photograph of the object, which was in front of his truck and close to the road.
The final reported sighting in Gulf Breeze took place in July of 1988. However, many wonder why the UFOs are coming to the area in the first place. Some speculate that it has something to do with the nearby military airbase. As of yet, the sightings have not been adequately explained.
Background: None
Investigations: When asked if the photos were a hoax, Ed Walters took two polygraphs and passed them both. Still, some experts believed that the photographs were faked. They point out the obvious brightness around the craft and note the lack of reflection on the light poles and trees. Also, it appears that the bottom of the object is unnaturally flat, as if resting on a board. However, the witnesses are certain that they saw a real object.
A television station in nearby Pensacola attempted to show how a hoax could have been accomplished. Reporter Mark Curtis worked on the case. The two most common theories presented were: the photos were reflections of an object off of a pane of glass; or double exposure was used to add the objects to the photos.
A local model-maker created a replica of the UFO and it was photographed reflected in a large piece of glass. The resulting photographs were similar, but not as clear as Ed's photos. More importantly, it took multiple people to re-create the photo. Also, Mark believed that people would have noticed Ed trying to hoax the photos.
Mark also tried creating the photos using double exposure. Using a camera identical to Ed's, they photographed the model against black velvet. They then shot the background image over the same frame of film. The problem with this theory was that Ed only took some of the photos using a camera capable of double exposure. Also, in at least two of the photos, the object is partially hidden behind a tree. This cannot be done using double exposure.
The videotape from Ed was also scrutinized by UFO experts. Bob Oescheler observed the video and determined that it was a flying craft that was not operated by remote control. Dr. Bruce McAbee determined that the object was twelve feet wide and nine feet tall.
Skeptics suggest that the UFOs are actually military aircraft being tested at the nearby Pensacola Naval Air Station. However, the military has denied any involvement in the sightings, claiming that they do not have aircraft that match the description of the objects.
Extra Notes:

Results: Unresolved. In December of 1988, Ed Walters and his family moved out of their house in Gulf Breeze. Ten months later, the house was purchased by Bob and Sara Lee Menzer. In March of 1990, Bob went into the attic to look for a shutoff valve for the water pipes. While searching through the insulation, he found a model of a UFO. At the time, they did not realize the importance of it, as they had not heard about the sightings beforehand.
Two months later in June, a reporter met with the Menzers and asked them about the sightings. He also asked if they had found anything associated with UFOs in the home. At that point, they recalled the model that they had found in the attic. They brought the model to the reporter, who took it to the offices of his newspaper. The following week, the story of the model's discovery made headlines in Gulf Breeze.
Ed, however, claimed that someone had planted the model in order to discredit him. The Pensacola paper showed how the model could be used in a hoax. Reporter Mark Curtis believes that the model is quite similar to the object seen in Ed's photos. He suspects that a similar model was used to make the alleged hoax photos.
The model is 9 inches across and 6 inches high. The black porthole are drawn on a strip of drafting paper cut from one of Ed's discarded house designs. According to Ed, however, his plan was made in September of 1989, almost two years after his initial photographs. Also, the witnesses from the sightings are certain that what they saw was not a model in the sky.
Gulf Breeze mayor Ed Gray believes that the photos were a hoax, created so that Ed Walters could make money and publicity off of them. Although many became convinced that the photos and sightings were hoaxes, others still believed in him. In fact, during a more recent sighting when Ed took new photographs of another object, there were other witnesses with him.
In January of 1989, he and his wife were walking in their neighborhood when they noticed a red object in the sky. They returned home and called Duane Cook, telling him to come quickly. Moments later, Ed was joined by Brenda and Buddy Pollack, along with Duane and his family. They all saw a red object in the sky. However, the object looked much different than the objects previously photographed by him.
After the object disappeared, Brenda took a time exposure photograph of the sky. The object appeared as a long string of colors. Experts determined that it had made over one-hundred color changes in the three-second exposure. This incident was only the second time that someone other than an immediate family member had seen Ed photograph a UFO. While this seemed to give credibility to Ed and his photographs, other witnesses later emerged that suggested it was a hoax after all.
One week after the model was discovered, twenty-year-old Gulf Breeze resident Tommy Smith came forward. He claimed that Ed had asked him to help create the hoax photographs. In January of 1988, Ed gave him six photos and told him to take them to the local papers. However, he did not go through with it. For two years, he kept this information secret from everyone except his parents. However, he said that he came forward because the model would help show that his story was the truth. Ed, of course, claimed that Tommy was lying.
In another newscast, Mark Curtis helped show how one of the photographs (where the UFO appeared to be landing on the road) could have been faked. UFO researcher Jerry Black later discovered a suspicious trail of money that led to Ed Walters, giving indications of a hoax. However, the UFO sightings in Gulf Breeze have never been completely explained.
Links: 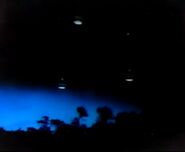