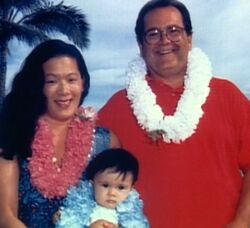 Gus Ortega with his parents 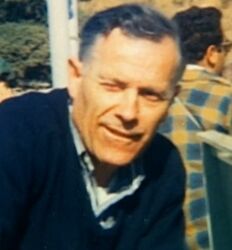 Details: On December 3, 1995, Ron Ortega and his wife had a baby who they named Gus. When he was about one and a half, Ron was changing his diaper. He said, "You know, when I was your age, I used to change your diapers." As he grew up, he made several other references similar to that. One day, Ron showed him some old family photos. In a class photo, he pointed out his grandfather, August Ortega. He identified the figure as himself, even though August had died one year before he was born and he had never seen any pictures of him before. In several other photos, he picked out August and identified himself.
Gus was also shown a picture of August's family business, which he identified as "his shop". He also said "I used to be big and now I'm a kid again!" He also started talking about an Ortega family tragedy. He claimed that he had a sister that died and became a "fish". In fact, August had a sister who was murdered by her husband in 1940, almost half a century earlier. He wrapped her body in a blanket and dumped it in the San Francisco Bay. Ron claims that Gus knew nothing about the incident.
By the age of five, most of Gus' memories of August faded away. Ron is convinced that Gus was the reincarnation of August.
Extra Notes: This case first aired on the July 16, 2001 episode along with that of Dee Klepper.
Results: Unsolved
Links: