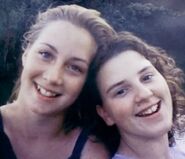 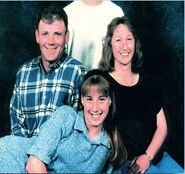 Ashley with her family

Occupation: Students
Date of Birth: (Lauria) April 18, 1983, (Ashley) December 30, 1983
Height: (Lauria) 5’5” (Ashley) 5'7"
Weight: (Lauria) 130 lbs. (Ashley) 145 lbs.
Marital Status: (Lauria) Single (Ashley) In a relationship with Jeremy Hurst
Characteristics:  Both are Caucasian females. Lauria has brown hair, hazel eyes, a mole under her nose, a scar on her head, and pierced ears, Ashley has dark blonde hair, blue eyes, a scar on the upper left side of her forehead, and an athletic build at the time of her disappearance.

Details: On the night of December 29, 1999, Ashley Freeman celebrated her sixteenth birthday with her best friend, Lauria Bible, her parents, Danny and Kathy Freeman, and her boyfriend, Jeremy Hurst. They celebrated at the Freemans' mobile home in Vinita, Oklahoma. Jeremy left at around 9:30pm.
Sometime during the night or early morning hours of December 30, 1999, a fire erupted inside the Freemans' mobile home. A concerned neighbor called the fire department at 5:30am on the morning of December 30, 1999. Lauria's parents and the police immediately canvassed the rubble for signs of the Freemans and Lauria. Kathy was found dead, but Danny's and the girls' bodies were nowhere to be found. An autopsy determined that Kathy had been shot to death. Arson investigators determined that the fire had been deliberately set.
Police theorized that Danny killed Kathy and abducted Ashley and Lauria. The next day, Lauria's parents went to the rubble, hoping to find a clue. After just five minutes, they were shocked to discover something that investigators had missed: another body, burned almost beyond recognition. It was identified as Danny's; he had also been shot to death at close range with a shotgun.
Ashley and Lauria's bodies weren't among Danny's, nor were they anywhere in the vicinity. However, another search of the property turned up an important clue: Lauria's purse, which was left behind with her driver's license and $200 inside. This suggested that the girls might have been abducted. It also led police to rule out robbery as a motive since the money was left behind.
There were no suspects in this case, but three months before his death, Danny had told his brother, Dwayne Vancil, that should anything happen to him, to look into the Craig County Sheriff's Department. The alleged feud between the department and the Freemans began when Danny's son, Shane, was shot and killed by a deputy after he stole a truck and a neighbor's gun. Although the shooting was ruled justifiable, Danny was planning to file a wrongful death lawsuit against the department just before the tragic fire. The sheriff's deputies volunteered to remove themselves from the investigation and turn the matter over to the Oklahoma State Bureau of Investigation. They cooperated and passed polygraph tests. The Sheriff's Office was later ruled out as being involved in this case.
Another theory speculated that Danny was a small-time drug trafficker. According to an informant, he had met with two unidentified men two weeks before the murders. One was apparently not welcome there. However, that theory did not fit well with the girls' disappearance. It would seem unlikely that the killers would abduct them and not just kill them at the scene.
Others believed Ashley killed Danny and Kathy because of friction between her and Danny, but authorities believed that the girls couldn't have hidden out for long if that theory was to be believed. Lauria's family also does not believe that either girl would be capable of murder.
No trace of Lauria or Ashley has ever been found. There is a $50,000 reward offered in this case.
Suspects: The Freemans have had an outstanding feud with the Craig County Sheriff's department over their son, Shane, who had been shot and killed by a deputy after the theft of a neighbor's truck and rifle. A judge later ruled the shooting as justifiable. An informant suggested that the murders and abduction were drug related. Jeremy Hurst was not a suspect in the girls' disappearance.
Extra Notes:

Results: Unresolved. A death row inmate named Jeremy Jones confessed to killing Danny and Kathy. He also claimed he took the girls to Kansas where he shot them and then threw their bodies into an abandoned mine. A search of the mine, however, turned up nothing. He then recanted the story. An arrest report showed that he was arrested at 4am on the morning of the fire, more than eighteen miles away. Another man has also confessed to the murders and abduction. However, these confessions are no longer believed to be credible. Ashley was declared legally dead in 2010.

In December 2017, new investigators discovered investigative notes from the original investigation that had apparently been lost. The investigators immediately began to follow new leads as a result of these notes. On April 23, 2018, Ronnie Dean Busick was arrested and charged with the murders. He was also charged with the girls' abduction and arson of the Freemans' mobile home. Two other suspects, Warren Phillip Welch and David Pennington, were also identified as being involved in this case; however, they died before they could be arrested. Investigators believe that Welch was the "mastermind" behind the crime, and that Pennington and Busick were his co-conspirators.
According to an affidavit released by investigators, the three men had been suspects from the very beginning. An insurance card was found at the crime scene that belonged to Welch's girlfriend at the time. Another girlfriend of his stated that he, Pennington, and Busick were involved in drugs and had admitted to killing the Freemans because they owed them drug money. They also indicated that they set fire to the Freemans' mobile home, abducted the girls, and killed them in another location.
Welch's girlfriend also told police that she had seen Polaroid photographs of the girls, which he kept in a soft leather briefcase. In them, they were tied up and bound. In some of them, he was with them. They were also laying on a bed, which she identified as belonging to him. She also said that she later took them from him, and he threatened to kill her and put her in "a pit with the missing girls". Unfortunately, she had since lost them.
Pennington’s girlfriend also told police that he had admitted to committing the murders and that Welch and Busick were the co-conspirators. He threatened to kill her if she went to the police. Another witness, a friend of Welch's second girlfriend, told police that she had also seen the photographs and had been threatened by him into silence. Yet another witness told police that Busick had bragged about his involvement in the murders.
Several other witnesses came forward, some as recently as 2017, claiming to have seen the photographs and hearing the suspects brag about the murders. Unfortunately, despite Busick's arrest, police have been unable to locate Lauria and Ashley’s bodies, but they are still actively investigating new tips and continue to search for them.
On July 15, 2020, Busick pleaded guilty to accessory to first-degree murder. In exchange for avoiding first-degree murder and arson charges, Busick was required to assist investigators with locating Lauria and Ashley's remains with a deadline of August 31. Unfortunately, no trace of them was found; Busick was then sentenced to ten years in prison and five years probation.
Links: