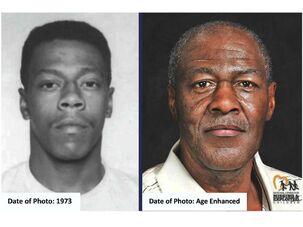 Details: Lester Eubanks is wanted for escaping the custody of the Ohio Department of Corrections while on a temporary honor furlough to go Christmas shopping in December of 1973. Eubanks had been serving time for the murder of fourteen-year-old Mary Ellen Deener. On November 14, 1965, Mary Ellen and her younger sister were doing laundry at a laundromat that day when they ran out of change. As she went to another laundromat to get more change, she disappeared.
Mary Ellen was later found dead nearby. She had been shot twice and beaten with a brick. Eubanks was later arrested for her murder. He confessed that he attempted to sexually assault her, but he killed her when she resisted. He was sentenced to death, but the sentence was commuted to life in prison in 1972.
Eubanks later became an "honor inmate" at the Ohio Penitentiary where he was incarcerated. As a result, he earned the privilege of a Christmas shopping trip at the Great Southern Shopping Center in Columbus. On December 7, 1973, he and several other inmates were taken to the shopping center and allowed to shop for several hours by themselves. Although the other inmates returned to their scheduled pick-up location, Eubanks disappeared.
Eubanks has not been seen since his escape in 1973. However, authorities believe that he went to Michigan afterwards and may have also spent time in Los Angeles, California. At the time, he was 5'11" and weighed 175 pounds. He has black hair and brown eyes. He has a large scar/burn on his upper right arm. His birthdate is October 31, 1943.
Extra Notes: This case was first released on October 19, 2020 as a part of the second volume of the Netflix reboot of Unsolved Mysteries.
The case was previously profiled on America’s Most Wanted and In Pursuit with John Walsh.
Results: Wanted. Eubanks is currently on the "U.S. Marshals 15 Most Wanted Fugitives" list.
Links: