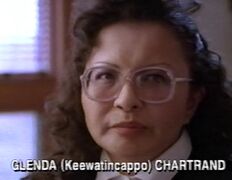 Details:In 1972, fourteen-year-old Glenda Keewatincappo's mother passed away. Shortly afterward, her father was forced to give her and her six siblings away. The youngest two, Gayle and Maureen, were adopted. The oldest two were sent to live with relatives. Glenda and her three brothers were sent to separate foster homes. Decades later, she was reunited with five of her six siblings, but her youngest sister, Maureen, is still missing. She was born on June 29, 1968, and was adopted by a family in Brandon, Manitoba.
Extra Notes:This case first aired on the February 9, 1993 episode, along with that of Bernie and Calvin Seaton.
Results: Unsolved
Links: None