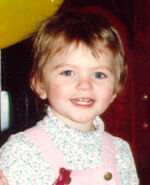 Details: Meriah and Sabria Widboom are the daughters of Brian Widboom and Rebecca Ryken. After their divorce, Brian received custody of the girls, and Rebecca remarried Gerald Brotherston, she now goes by the name Rebecca Brotherston. Brian willingly dropped off his daughters to be with Rebecca on Mother's Day in 1994, but she did not willingly return them. Every time, the authorities started getting closer to her, she would disappear with the girls again. Given his ex-wife's reputation, Brian is very concerned for the welfare of his daughters.

Suspects: Rachel Brotherston has a 1990 conviction in a first-degree theft case from a Medford hotel. In 1993, Gerald Brotherston was accused of rape by his ex-wife, but was merely convicted on a fourth-degree assault charge.
Extra Notes: This case originally ran on the October 25, 1996 episode as a Special Alert.
Results: Solved. Both girls and their mother were discovered living in Western Washington state using the last name, Brotherson. Further details are unavailable.
Andrew Ryken, Rebecca's son and half-brother to the girls passed away in 2014.
Links: