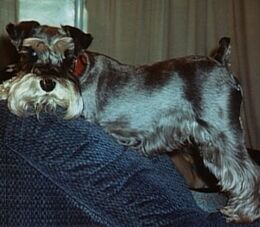 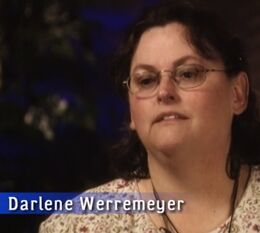 Details: In 1991, Darlene Werremeyer was diagnosed with diabetes which triggered a series of medical setbacks. While recovering from open heart surgery, she suffered a stroke and, for a while, lost her ability to speak. After several years of therapy, Darlene was able to speak again but had stuttering problems. Then, while at a family reunion in 2001, a schnauzer named Maggie helped calm her. She was finally able to speak well.
Darlene told her neurologist, who gave her a prescription for a dog. She soon adopted a schnauzer named Shadow. As the weeks went by, Darlene's speech began to improve thanks to Shadow. Then, one afternoon, Darlene sat down for a nap and quickly dozed off. However, Shadow was alarmed and would not let her sleep. Darlene decided to check the glucose level of her blood; it was dangerously low. If not treated, this could have caused her to lapse in a coma. Darlene is now certain that she was saved by Shadow. She is glad to be alive thanks to her dog.
Extra Notes: The case was featured as a part of the July 15, 2002 episode, as a part of a segment focusing on pets that can detect illnesses in their owners, along with Mia the dog.
Results: Unsolved
Links: