The Family of Monica Libao 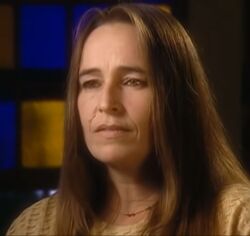 Details: Monica Susie Libao was raised as the daughter of Pablo and Burma Libao with two older sisters. Frustrated by her family's nomadic lifestyle, she began to suspect that they were not her real family. Strange circumstances included her always missing school picture day and moving a total of twenty-nine times within just fifteen years.
Monica's suspicions were confirmed when she discovered at age sixteen that Burma had a total hysterectomy in 1945, fifteen years before she was born. Therefore, she could not be her birth mother. Monica confronted her with this information, and she told her that her birth mother was in fact one of her elder daughters, who was nineteen when she was born. She was surprised, but she believed Burma at first.
Monica later found her birth certificate which was largely incomplete; it did not list a hospital, address, or doctor and said she was born in Chicago in the 1960s. It had also been filed when she was seven, not when she was born. Finally, her social security number turned out to be her father's.
Monica met with the sister who Burma claimed was her birth mother who consequently told her that Burma was lying. She said that her birth mother had sold her to Burma for the fare of a bus ticket, and was "trash". She also said that Pablo and Burma had paid a lawyer $2,000 to make a fake birth certificate. In 1990, Monica contacted Illinois Judge Jean Scott, in hopes of finding adoption records. She told her that she could not find any about her from the 1960s.
In spite of her wondering about her past, Monica settled down, married, and had a daughter. During a rare family get together several years later, she asked Burma about the story she was told by her sister. A heated argument ensued, with things like lying to the police, roadblocks, and hiding a baby in a cardboard box being brought up by Burma and her daughter. Monica has since been forced to realize that her parents constant moving may have been their flight from the law.
Pablo and Burma have both since passed away without revealing the truth about Monica's real family. Recently, her sister left her husband of twenty-five years and is no longer in contact with any relatives. She is hoping to find her again in order get DNA testing done.
Tragically, Monica's husband passed away in 1998 at the age of thirty-one. She is still hoping to find the truth about her past. The only clues to it are a uniquely shaped lobe on her left ear and the possibility that she was kidnapped in Miami, Florida, in 1963 or 1964.

Extra Notes: This case first aired on the June 21, 2002 episode.
Results: Unsolved. Monica had her DNA compared to the families of several children missing from the 1960s, including that of Elizabeth Ann Gill, who was last seen on the afternoon of June 13, 1965, in her front yard in Cape Girardeau, Missouri. However, the DNA tests proved that despite their similarities, she was not any of the missing children. She also had DNA tests conducted with her sister and other relatives, which confirmed that she was not biologically related to Pablo and Burma. In 2015, she had her DNA submitted to CODIS, along with several ancestry websites. She has been able to locate several biological cousins; however, they are distant relatives who have no memory of her. She is still searching for her birth parents.
Links: