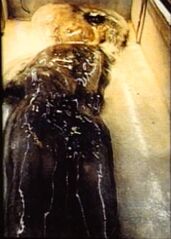 Actual photograph of the Iceman 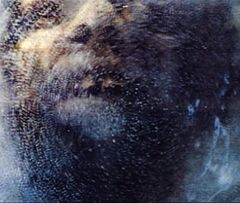 Photograph of the Iceman's face

Case File: The Ice Man
Location: Chicago, Illinois; Minnesota
Date: December 1968
Description: The Ice Man (or "Minnesota Iceman" as it is known within cryptozoology) is described as a man-like creature that has ape-like features, frozen in a block of ice. It was approximately 6 feet tall, and apparently had a traumatic injury on the left side of its face.

History: From 1967 to 1968, a bizarre creature named the "Ice Man" was shown at the Chicago Stock Fair and several other carnivals and state fairs in the Midwest. It was six feet tall, covered with hair, had both man and ape-like features, and was frozen in a block of ice. Thousands came to see the creature, but no one could figure out what it was.
Several people who have seen the creature are certain that it was an actual deceased primitive human. Zookeeper Bob Surpleski saw the creature when he was eighteen. He knew that it was not made out of latex or rubber. He was also certain that it was not man-made. Environmentalist David Rivard viewed the exhibit in 1968. He and other onlookers could tell that it was not a "wax animal" or a machine. He believed that it was a formerly live animal.
Dr. Terry Cullen is a zoological and veterinary researcher. He first saw the creature when he was seventeen. He noticed that the creature appeared to be a six-foot tall adolescent male. It was covered with medium-length hair and had highly visible follicles. He also noticed a traumatic injury to the left side of the face. He stated that there was a notable odor coming from it as well. He was certain that it was "made out of flesh".
Terry visited the creature several times and became convinced of its authenticity. On one visit, he sneaked in a magnifying glass to get a better look at it. With the help of the magnifying glass, he was able to tell that there was a death grimace on the face. He also noticed that the upper lip was pulled back a bit. He also observed all four incisors, which were very and large and squarish, similar to an orangutan's incisors.
Terry felt that the creature was important enough to bring in scientific personnel to view it, hoping to establish that it was either some unknown creature or a fake. Over the next few weeks, he tried to entice several scientific experts to view the creature. Eventually, he convinced an anthropologist from the University of Minnesota to view it. The anthropologist spent about fifteen minutes observing the creature before leaving. He was shocked and amazed by the creature, but could say little else about it to Terry.
A man named Frank Hansen got possession of the "Ice Man" in 1967; he showed it briefly to several scientists and fair-goers. When the creature became national news in the summer of 1969, the FBI became involved, believing that the creature was a murder victim. An officer met with Frank and he agreed to show him the creature. The officer told him that he would come back the next day with a pathologist to examine it. That night, however, Frank left town with the creature.
A few months later, Frank turned up showing off a replica of the "Ice Man" at several fairs in the Midwest. The real "Ice Man" has not been seen since 1969. Frank refuses to talk about the creature and where it really came from.
Background: In 1967, Frank Hansen was traveling the state fair circuit exhibiting an antique mechanical contraption that he billed as the first gas-powered tractor. At one stop, he was allegedly approached by a mysterious soft-spoken stranger. The man gave him his business card and told him that he had an exhibit that he may be interested in. Frank later met the stranger at a refrigerated warehouse in an unknown location. He showed Frank the "Ice Man" which was stored in a box in the warehouse. Frank agreed to take the creature on the road and billed it as an educational exhibit.
The stranger told Frank that he found the "Ice Man" in Minnesota. However, Frank has since changed his story several times. In another version, he claimed that the man had found the creature in Siberia.
Investigations: Terry Cullen convinced crypto-zoological scientists Ivan Sanderson and Dr. Bernard Heuvelmans to examine the creature. In December 1968, they visited Frank's barn in southeastern Minnesota. They examined it several times and concluded that the "Ice Man" was a genuine creature with severe head injuries to the side of the face. They believe that it was a prehistoric relative of man that survived into the 20th century. In May 1969, they published their findings in a tabloid magazine for science buffs.
Primatologist John Napier was asked by Sanderson to help examine the creature. He and the Smithsonian also investigated Frank and learned that he had commissioned the creation of the creature from a West Coast company in 1967. He concluded that there was no "original" creature and that the latex rubber replica was the only one that existed.
Extra Notes: The case was featured as a part of the September 25, 1994 episode.
Frank Hansen denied the show's request for an interview.
Cryptozoologist Mark A. Hall of Minnesota appeared on the show detailing his involvement in viewing and documenting the movement of the Minnesota Iceman for Ivan T. Sanderson and Bernard Heuvelmans, in conjunction with similar tracking occurring throughout the Midwest by his associate cryptozoologist Loren Coleman, then living in Illinois.
Results: Unsolved. Sanderson and Heuvelmans both thought the carcass could have been that of a surviving Neanderthal or other prehistoric hominoid. However, most scientists are convinced that the "Ice Man" is a hoax.
In 2013, the carcass allegedly resurfaced; it was auctioned on eBay and purchased by the owner of the "Museum of the Weird". The new owner claimed to have purchased it from a man who purchased it from Frank Hansen's family after his death in 2003. However, it is suspected that the "carcass" that resurfaced is actually the replica, not the original.
Links: