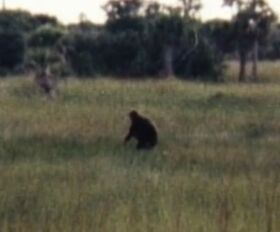 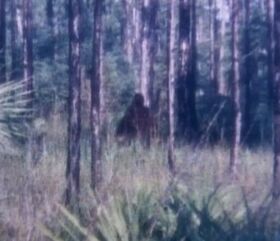 Case File: The Skunk Ape
Location: Florida Everglades
Date: 1970s to present
Description: The Skunk Ape is described as an ape-like creature that walks like a human and has a foul odor, smelling similar to a skunk. It is usually between 6' and 8' tall.

History: In the Florida Everglades, several residents have reported seeing a mysterious unknown creature that lives in the swamps. Sightings of it started in the late 1960s or early 1970s; many occurred during the fall of 1974 in suburban neighborhoods in Dade County. On July 17, 1997, tour guide John Vickers was driving a tour bus when he noticed a hairy creature stand on its hind legs and cross the road in front of him. Five other people on the bus saw it as well. Two days later, real estate agent Jan Brack saw a similar creature cross the road in front of her car. At first she thought it was a bear, but when she looked more closely she realized that it was not a bear; she has no idea what the creature really was. Her neighbor, Vince Doerr, came down the same road a few minutes later. He saw the same creature and actually took a picture of it (seen above).
In September 1998, David Shealy was in the swamp when he saw the creature coming towards him. He took over twenty pictures of it. David actually began searching for it in 1973 when he and his brother encountered it. It appears to be similar to Bigfoot in that it looks similar to a large ape and walks on two legs, similar to a human. The difference is that this one smells like a skunk, which is why it is given the name "The Skunk Ape".
Tracker T.L. Riggs was looking for the Skunk Ape when he located several hair samples on a broken tree branch. DNA tests at Trinity University in Texas showed that the hairs were not from a dog, cat, skunk, bear, chimpanzee, gorilla, human, or from any type of costume. Some believe that the hairs are actually from a Skunk Ape and that the testing done will prove what the creature actually is.
Background: None
Investigations: Archaeologist Bob Carr examined the photographs taken by David Shealy. He believed that the stature, size, and motion of the creature did not appear to be that of a human being. The gait appeared to be primate-like.
Loren Coleman has researched several of the Skunk Ape sightings, including the Myakka photographs. T.L. Riggs studied the footprints that were left by the Skunk Ape and determined that the creature weighed over 300 pounds.
Extra Notes: The case was featured as a part of the April 9, 1999 episode.

Results: Unsolved. Further DNA testing on the hairs was inconclusive. In 2000, a woman in Florida photographed an animal that had apparently been stealing apples from a basket. She believed that the creature was either a Skunk Ape or an orangutan that escaped from the zoo. However, there is some speculation that the story is a hoax because the woman has never come forward. Instead, she sent the photographs and a letter anonymously to the police; she described her sighting in the letter. These photographs are nicknamed the "Myakka photographs".
There have been several reported sightings of the Skunk Ape throughout the Florida Everglades in recent years. However, no physical evidence has been found to support the existence of it.
Links: