Case File: United Kingdom Crop Circles
Location: Numerous locations through Southern England
Date: June 15, 1988
Description: Scattered over numerous sites across the country, hundreds of crop circles in strange, complex shapes have been found throughout southern England since the 1970s. Some people believe they are connected to sightings of strange lights or UFOs that are seen the night before the circles are discovered.

History: Crop circles are a recent phenomenon that have been occurring within the last thirty to forty years. Throughout England, many large crop circles have been appearing. Nearly 95% of these circles are located near the mysterious landmark known as Stonehenge, along with other rock monuments. Charity Down is a farm located several miles away from London. On June 15, 1988, farmer Chris Woods drove a tractor through one of the wheat-fields when he saw a giant circle that had appeared in the field. Nobody can explain how it got there.
Since the late 1970s, hundreds of similar crop circles have been found in fields throughout southern England. Some of them have been as large as 100 yards. They apparently form overnight in fields of wheat, rice, and corn. The circles are never cut, but pressed down in a swirling pattern both clockwise and counterclockwise; interestingly, the crop is not damaged and is harvested normally. There are never any footprints or tire tracks found near the circles. Some appear in twos, threes, or even in fours or fives that make complex geometric shapes. Some have satellites, or smaller crop circles around them, while some have rings around them. Amazingly, some have both satellites and rings.
Several researchers, including Pat Delgado, Colin Andrews, and Archibald Roy have studied the crop circles. They do not believe that the circles are hoaxes. They base this on the detail that has been put into the circles, along with the large amount of circles. As part of a televised experiment, British military personnel tried to create a crop circles with several mechanical tools. Researchers determined that the difference between the "hoax" circles and the "real" circles is what is happening to the plants. The roots in the real circles are softened, bended, and hardened. If the circles are not a hoax, then what are truly creating them? Several theories have been brought up and discarded.
Infrared technology showed that there was no evidence of sinkholes, or anything similar that could have caused it. Although some believe that whirlwinds are the cause of the circles, other scientists and farmers believe that whirlwinds could not do that. Regardless, the crop circles appear to form overnight and are believed to be related to lights that are seen during the night near where the circles are found. One sighting occurred on July 6, 1985, while Pat and Jack Colins were driving in farmland near Stonehenge. They saw a circle with lights all around it in the sky; they believe that it may have been a UFO. According to Colin Andrews, two circles were found the next day; they were in direct alignment with the UFO.
In the summer of 1988, a British team of scientists began a surveillance operation, hoping to observe a crop circle being formed. The operation went on for eight days and nights, but no circles formed. Interestingly, no circles appeared throughout most of Southern England during that time. The creator of the circles apparently knew about the watch, bringing the possibility that intelligent life might exist outside of Earth. Even though they didn't find any circles, they did find that there was an energy field in one of the circles. Many scientists believe that this energy field is significant. Nobody has any idea who made the circles or why they were made.
Background: None
Investigations: Richard G. Andrew has investigated the England crop circles. Pat Delgado and Colin Andrews have spent over a decade studying the crop circle phenomenon, and have even written a book about it. Originally, they received reports of one or two in the late 70s, ten to twenty in the early 80s, and in 1988, 98 circles formed in five months. Then, in 1989, there were over 200 circles in just a few months, according to Delgado and Andrews.
They don't believe that the crop circles could be weather-related. Some researchers believe that the England crop circles are a hoax. Glasgow University professor Archibald Roy has studied the circles since 1980; he has not found any theories that adequately explain their formation. Some theories he have found include: circles formed by hundreds of hedgehogs, imprints of UFOs, helicopters, whirlwinds, and hoaxes by humans. However, Archibald does not believe that they were hoaxes because of the large amount of the circles that have been discovered.
Extra Notes: The case was featured as a part of the January 31, 1990 episode. An update to this segment aired on September 12, 1990.
A similar case is that of the Canada Crop Circles.
Results: Unresolved. Since the story aired, 500 more crop circles were discovered in England. There were also circles discovered in several other countries, including the United States. Several new and more complex designs were found, including one that had rectangles through the center. In June, three pictograms were made, making it the largest crop circle formation in the world. Colin Andrews believes that because the circle was so large, it could not have been man-made. Shortly afterwards, another experiment was done to try to capture a circle on film. For three weeks, scientists and other experts monitored one of the most active crop circle areas. Amazingly, four circles formed there, and even though two were dismissed as hoaxes, the other two appear to be genuine.
Botanists recently compared the samples of the plants inside the circle to the ones outside of the circle; surprisingly, they were much different in patterns. Some believe that the causes of the circle formations are supernatural, mainly because the structure of plants cannot change because of humans or natural phenomena. Most amazing to many is the circles that are forming throughout other countries.
In 1991, two men, Doug Bower and Dave Chorley, came forward claiming that they were responsible for several crop circles that occurred in 1978 in England. Several other crop circles in England have also been proven to be hoaxes; however, many of the crop circles in England and in other countries still cannot be explained.
Sadly, researcher Pat Delgado passed away in 2009.
Links: 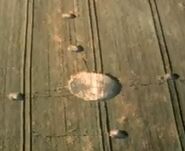 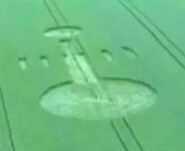 Add a photo to this gallery
Retrieved from "https://unsolvedmysteries.fandom.com/wiki/United_Kingdom_Crop_Circles?oldid=45313"
Community content is available under CC-BY-SA unless otherwise noted.