Details: Since the 1970s, a series of strange lights have been described and reported in the night sky near the home of Vancouver housewife Dorothy Izatt. Dorothy first reported seeing the lights on the evening of November 9, 1974. On that night, she was in the kitchen when she had a feeling that someone was watching her. She looked out the window and saw a strange diamond-shaped object in the sky. At first, her family did not take her sightings seriously. She decided to go out and prove that the objects she were seeing were not of natural or human origin. She used a flashlight to try and contact the object. She noticed the object actually followed her flashlight.
Realizing that the objects were trying to communicate with her, she decided to get them on film. In the video, there are several balls of light flying in the same direction. At certain points, however, there are bright flashes on the screen. When Dorothy looked at the video on her home viewer, she inched the film back and forth until she discovered that the flashes contained several lines and streaks moving in different directions on the screen. She believes that these lines were a way of communication for the objects.
In other photographs, it is clear that the objects are defined shapes. She has stated that she has used at least three different cameras, including an 8-mm. With each camera, she has recorded similar shapes and objects.
Throughout the 1970s and 1980s, Dorothy became well-known in the UFO community for her bizarre photographs. One UFO investigator met with her recently at her home. While looking through her photographs, he had a bizarre audible sensation in his right ear. When he mentioned this, she stated that she could hear it too. In fact, she had felt this sensation multiple times before her sightings. Within less than a minutes of hearing the sounds, the two went outside and saw a bright metallic object in the sky.
In total, Dorothy has accumulated over twenty-five hours of film and has had blow-ups made of over three-thousand frames. However, she does not know if the objects are trying to give her a message from her photographs and film.
A psychologist that has investigated Dorothy believes that she is telling the truth, although he is uncertain if the objects in the photographs area actually UFOs. A photograph expert investigated her photographs; he believes that they most likely were not faked due to the various effects that are shown. However, he believes that they are a natural phenomena, and not from extraterrestrials.
Extra Notes: This case first aired on the December 12, 1990 episode.
Results: Unsolved. When Unsolved Mysteries camermen went to film Dorothy's story, she stated that the lights were there, although nobody else could see them. She and the cameramen filmed the sky with their respective cameras. Her camera showed the usual bizarre light patterns, but there was no evidence of this in the cameramens' videos.
Links: 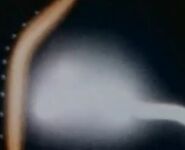 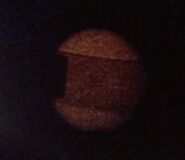